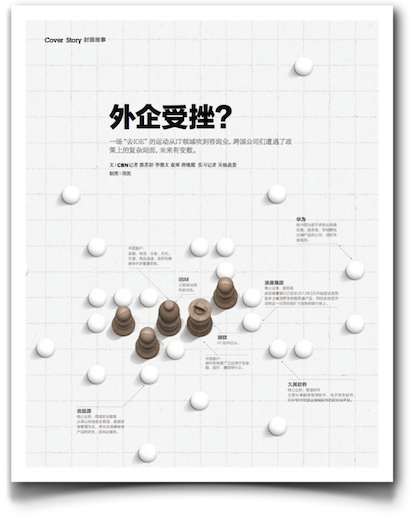 From any Western standard, the Chinese Government is always intervening the market too much. But Chinese Government’s take is obviously different. On the one hand, the Government tries to control the speed of change, imposing restrictions on foreign companies to avoid an excessive “colonization effect”: if you want to do business in China, you will have to play by their rules, share ownership, hire Chinese managers, etc. even though the job market for some positions, particularly engineers, is becoming in some cases more expensive than European countries such as Spain. On the other, they know they can impose such restrictions, since they are the gatekeepers to a very interesting market in terms of both size and labor costs. As Chinese companies gain more size, experience and competitiveness, giving them a window of privileged access to the huge Chinese market becomes extremely important to sustain their position and their chances of success when venturing into foreign markets.

The escalation of tensions between the US and China is the result of the two largest economies of the world being in a collision course for many years. Witnessing how the FBI indicts five Chinese military officers with stealing data from six US companies and unions must be seen as the biggest of all ironies when it comes precisely from the country that used its hypertrophied NSA to spy right into the heart of Huawei. In the post-Snowden era, the US has rightfully lost its right to complain against any type of industrial or military spying.

China has dedicated most of the first decade of the XXI century to move from the “manufactured in China” label to the “engineered in China” one. The Chinese Government and many private companies have been consistently sending the best Chinese students to the best American and European universities to pursue engineering and management studies, to work long periods for American and European companies, and even to become entrepreneurs in these countries, with the long term plan of getting them to go back to China after, in many cases, periods of ten or even fifteen years.

Now, China is not anymore “the place where you can manufacture everything at a very low cost”, but a country that can create their own highly competitive products from scratch and compete with the best Western ones. Forget about that place where “everything that could be manufactured by hand would be manufactured by hand because it was extremely cheap”… now, Foxconn is investing a huge amount of money to turn its more than 1.3 low-qualified million employees into the largest army of robots ever built, to be able not only to scale up their manufacturing capacity, but also its level of quality and precision. Some of the best regarded engineers and managers from US companies, such as Google’s Hugo Barra, leave their positions to go to Chinese companies such as Xiaomi, and these companies do not need to “disguise” their brands as non-Chinese anymore to be regarded as competitive in most Western markets.

Consider the consumer infrastructure: not many Chinese citizens had a computer at home in comparison to the statistics in the Western world. But an increasingly high number of them own a smartphone, and the whole country considers mobile as the new revolution, one that is developing so blazingly fast in the Chinese society, that seems to be leapfrogging most other countries.

Drop by some business schools in China: you won’t see the typical lecture-style class with a boring professor reading from his or her desk and the students taking notes. Instead, you’l see highly energetic, American or European-trained Chinese professors moving all over the classroom, aggressively cold-calling students and using the case method, following the best Western tradition.

The “new China” from 2014 differs a lot from the “already new China” we saw at the beginning of this century. And the US Government knows that.