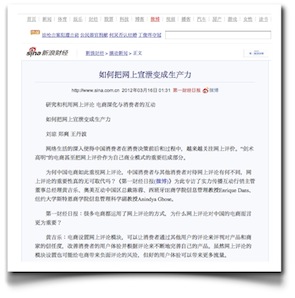 Q. What do comments on the Internet mean for Chinese electronic commerce?

A. China conveys the image of a huge market, extremely complex and not easy to understand, filled with very specific cultural, political and economic differences. Such a level of complexity generates anxiety in customers, both in consumer and business markets, and the usual customer behavior when facing anxiety is to go straight to a search engine. These days, a search engine is considered the best cure for anxiety: provides references and experiences from other customers, and in many cases are even improved by social references (not just «some guy says this», but «my friend X on Facebook or Twitter says that – and I can even ask for clarifications if I feel like doing so») . In this context, comments become a key source of revenue both in positive and negative terms.

Q. As far as you know, do electronic commerce websites abroad make full use of the comments on the Internet?

A. In some industries, managing the information contained in comments has become a major concern. In the tourism industry, for instance, the trend is huge: considering that some hotel chains can obtain as much as 70% of their reservations via the internet, the concern seems more than justified. These companies are doing things like searching for comments, applying semantic analysis so they can get their real meaning and classify them according to whether they are positive, neutral or negative, and detecting the keywords implied in such judgement… in eight or ten different languages!!! Others engage in direct actions such as conditioning a significant part of the variable compensation of the workforce in a hotel according to the number of positive/negative comments on social sites like TripAdvisor.

Q. Do you think Chinese electronic commerce websites take comments on the Internet as a part of their business model?

A. With the limited perspective one can get from abroad, Chinese electronic commerce websites seem to be in the previous stage: they still apply techniques that could be considered as «spammy»: massive email messages offering their products. These days, nobody is going to trust messages, not to mention that many of them go straight to the spam folder with the user not even noticing! Comments, in fact, are just a part of a more complex phenomenon: the social web as a whole. All electronic commerce will be social commerce soon.

Q. In your opinion, which are the major advantages of the comments on the Internet that the successful cases make use of? Do they fully understand consumer psychology?

A. Comments are just a manifestation of a certain feeling. A customer complaining on Twitter, for instance, usually signals a great deal of frustration, but can be tackled with if – provided that the company is willing to do so – by using the appropriate attitude. Many companies are resourcing to places such as Facebook or Twitter for customer service, and an increasing number of customers are also resourcing to those networks as a way to get additional references about electronic commerce sites. I am not going to buy from a place if none of my friends  in the social web have nothing to say about it, and even less if they have negative comments about their experiences with such vendor.

Q. Will comments on the Internet exert influence on the profits of electronic commerce and promote consumption?

A. The important issue is to approach comments with the proper attitude. Years ago, companies started to fake comments posing as «satisfied customers», or the other way around, as «upset customers in competitors’ sites»… none of that will ever work, it is just a stupid, short-sighted approach. With the popularization of the social web, customers have become smart, they can perfectly discern a fake comment from a real one, or pay attention only to comments that make sense, or filter comments according to their social networks. And of course, comments are increasingly becoming a key element when choosing a product or service on the web.

Q. Do you think if the comments on the Internet are replaceable? And what may rival against those comments?

A. Comments are being replaced by «qualified comments», filtered according to each person’s social network. An anonymous comment in a site is not as important as a comment from a friend or acquaintance in a social network: if I find the comment interesting, I can even go back to that person to ask for the specifics of his or her experience, etc. Social networks bond people together, and as a result, commerce is becoming social.